Pier Paolo Pasolini is one of Italy’s great cultural icons whose talents spanned many disciplines. Film director, poet, philosopher, actor, painter, journalist and much, much more, Pasolini was a true intellectual colossus whose influence is still felt almost 40 years after his death, at just 53 years old, in 1975.

Such is the importance of Pasolini that the city of Lecce, where this exhibition is currently being staged, included it as part of its bid to become European Capital of Culture 2019.

Calling this merely “an exhibition” is doing it a disservice as, like the man himself, it does not fit neatly into such a simple category. Think of it more as a multi-media experience involving film clips, books, images, audio clips, songs as well as paintings from this prolific and unique Italian.

Should you find yourself in Lecce in the next few weeks there are few better ways to spend time than to immerse yourself for a few hours in the controversial, provocative, outspoken, multi-faceted world of Pasolini. 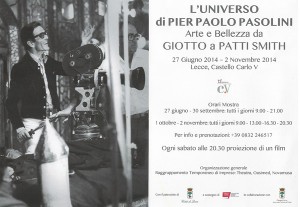