ESSENTIS CEO Francesco Carlucci is quoted in a Sunday Times article on 1 June, 2014 which discusses the growing popularity of Puglia as a place for foreigner buyers to invest in property.

The article describes Carlucci as having “ cornered the market in new-build luxury masserie in Puglia,” and explains that he has now completed 25 properties since 2007.

“High-profile people choose Puglia for the simple, low-key existence that they can no longer enjoy in Tuscany, which has become so glossy it’s like a film set,” Carlucci says, also admitting that Puglia “has become more sophisticated, with growing numbers of five-star hotels and Ibiza-type beach clubs, such as La Dolce Riva in Otranto and the Punta della Suina in Gallipoli.”

The article explains how a shortage of high-end rental properties means masserie such as the ones built by Essentis command high letting rates of up to Euro 19,000 a week. “A Euro 5m property in Tuscany typically makes less than 50% of the income of a Euro 2m property in Puglia,” Carlucci says.

If you are interested in owning one of only four properties available in 2015/2016 then get in touch now. 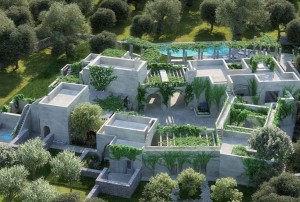