Organised by the city of Aradeo with the support of the comune of Lecce and the region of Puglia, this international festival, held over six days in some of Salento’s most beautiful locations, celebrates the folkloric tradition of the countries of the Mediterranean basin.
North African music, dance, workshops, food and crafts all combine together in a spectacular kaleidoscope of artistic expression. The young performers are mainly from Algeria, Morocco and Tunisia and the aim is to promote international relations by focussing on shared cultural ties rather than national differences.

Where: In and around Aradeo, Lecce, Puglia 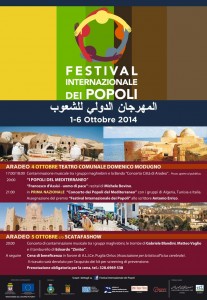