Some of the most important artists of the Salentino – Grico music scene take part in the fifth edition of this very special event in the heart of Salento, as well as other important figures in the world of popular music such as guitarist Marco Poeta (on the 21st).

The intimate little festival is hosted at the Masseria Sant’Angelo and is a joint collaboration between the masseria and Salento Altra Musica.

As well as the music, there are local dishes to try of both Salento and Greek origin, so tsatsiki joins cacioricotta, polpette and wine on the menu.

The festival is held on two nights under starry skies and is a perfect chance to get to know more about Salento’s strong Greek connections.

Price: Free entry but there is a collection for charity during the performances. 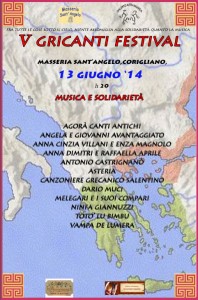