The full title of this exhibition is intended to intrigue. “Il Mito di Leonardo a Otranto. Monna Lisa e la Gioconda nuda attraverso cinque secoli” translates as “The myth of Leonardo at Otranto. Mona Lisa and the nude Gioconda over five centuries.” On the promotion poster above, the amused eyes of the subject appear above the phrase “I know something you don’t know”, although by the end of the show you should be a lot better informed!

The much-discussed topless Mona Lisa, also known as the Monna Vanna, is attributed to da Vinci’s pupil Giacomo Caprotti who used the name Andrea Salai. One theory is that the painting is a copy of a lost masterpiece by da Vinci. Others have it that the Mona Lisa herself is in fact Caprotti, a favourite of Leonardo’s, something dismissed outright by the Louvre.

Wherever the truth lies, there is no doubt that the Mona Lisa has inspired and enchanted since the early 1500’s. This exhibition looks at both the story of the painting itself (and the topless pastiche) and the many works since that have been inspired by the enigmatic portrait.

The show tells its tale using a variety of forms, including installations, video, images, talks and workshops. It also highlights and references Leonardo’s connections with Puglia and Otranto. 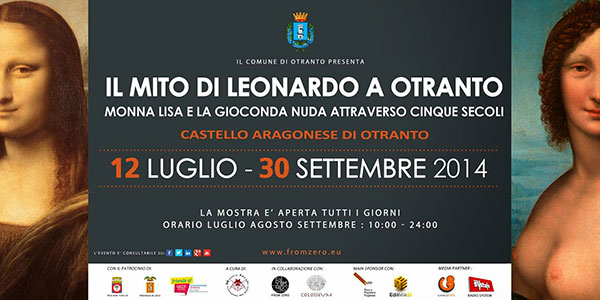